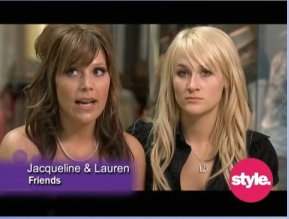 “What starts as an ordinary day at the mall turns into a high-tension TV when five very special shoppers are ambushed by IBP and invited to participate in a real-life beauty pageant. But there’s a catch: The contestants must be ready for the catwalk in less than three hours!With limited time to create an entire pageant ensemble, the contenders race around the mall on a frenzied shopping spree to prepared for the spotlight. Ready or not when three hours is up, the beauty pageant begins!”

Many, many moons ago – before I was a mother, wife, or even an adult really – I was on a reality T.V. show. Yes, you read that right; most people who have only been in my life the last couple years probably don’t know this fact, but it’s true – I appeared in a show on the E! and Style Network called “Instant Beauty Pageant”. This happened when I was 23 years old and naive as hell – meaning I had absolutely no idea what I was getting myself into. Looking back now I realize that I did learn a lot from this experience, enjoyed myself  immensely and it truly changed the path of my life. But did I ever learn a lot from my “reality” T.V. appearance.

This is what 10 hours of filming and no food looks like.

Lets start at the very beginning. ‘An ordinary day at the mall’ was actually a casting call that happened days beforehand, when my best friend Lauren (seen beside me looking thrilled in the picture above) told me she had answered some type of post about a T.V. interning position, regarding her communications degree – I really can’t remember what it was exactly, because back in those days I was a ride or die girlfriend – down for pretty much anything as long as it was a good time, and didn’t ask many questions. She brought me along and it ended up being an interview setting – they were looking for five energetic, entertaining teams of 2 to appear on a reality TV show. Being the fun loving, silly and wild younglings we were – after about 5 minutes they invited us to be on the show. And with aspirations of being like Paris Hilton and Nicole Ritchie on “The Simple Life” ringing in our ears, we decided to go for it! They told to come to the mall for filming in a couple days – so it was absolutely NOT a random, ‘ordinary day at the mall’ for us.

“Ambushed by IBP”- again, we were definitely not ambushed- we were placed in the mall, in a specific store, looking at a specific product, to be chosen “randomly” by the hosts – ‘The View’ alumni Debbie Matenopoulos and soap opera star from  ‘All My Children” Cameron Mathison, who were the hosts ( both whom were super kind and nice, might I add). We then were given cash to go around the mall and again, the description reads:

“The contest commences on the spot and covers the standard categories: talent, swimsuit and evening wear. A live audience judges each contestant’s presentation, fashion and overall style and then Ms. Instant Beauty is revealed! In addition to bragging rights each winner earns a vacation, the rights to keep her pageant purchases and most importantly a dazzling Zivot crown to call her own.”

So basically Lauren was my partner, I was the contestant, and we were to get together evening wear, a swimsuit and talent portion together in a couple of hours, to get ready for the big pageant held later that night. A little background – Lauren and I have been doing musical theater together since high school and were both seasoned veterans of the stage, so this was a piece of cake for us. But as for the other girls casted? I had no idea what their stories were. As it turns out, each group of us already had a backstory and storyline played out and planned for us by the producers of the show beforehand. They had already chosen a villain and a likable comeback kid (yours truly), a Cinderella story; the “smart” one, the “dumb” one, and as we were to soon find out, had planned out drama and story lines to unfold before we even had a chance to start.

So off we went, unknowing of what we were getting into. Being the showgirls at heart that we are, Lauren and I ran around the mall with someone else’s cash, loving that we had a boom mic in our faces at all times and a camera crew following us and laughing at our every move. We went from store to store, being silly and enjoying ourselves – at first. However, soon we had producers on our asses saying “Hustle, hurry – time is almost up!” Um… what? We had just started? This is a tactic they use to make us seem worried and frazzled, because drama = more entertainment on these shows. After I saw the footage of the other contestants they did similar things to them – one groups money “mysteriously” vanished, so producers pushed them to ask for money from strangers. Anything to create turmoil and put us in situations very much unlike reality.

Next, after being withheld food most of the day (hangry girls = more bitchy and more entertaining) they told us exactly when to have a very late  “lunch break”- which was placed at a certain restaurant, at an exact time – and specifically placed near one of the teams we were competing against. All of a sudden, after waiting for our meal, we were told by a producer that our “meals had vanished”- and we were forced to go look for them. Again…what?! Low and behold, it had been the other girls who had “hidden” our food. False – this was again another attempt at drama and another story line. I was quickly learning that “reality” TV didn’t have much realness to it at all.

Fast forward to after we had gotten my outfits, planned the talent portion, and had to learn choreography for the opening of the show. Again, as I have a dance background the simple entrance was pretty easy for me, but when watching the show they made it seem as if we all had extreme difficulty learning the steps. Anything to create a little bit of drama! Lastly, once the actual pageant began it ran pretty much like an average one would – just with a ton of filming and camera crews interviewing our every move. In the end yours truly won the pageant – they say it was by the judges choice but really, who knows? Throughout the show they had played my character up as the quirky, kind, likeable girl who deserved to win, so I’m not sure if my song and dance rendition of “Girl’s Just Wanna Have Fun” (chosen from a pre-selected list of songs, might I add) in the talent portion was what did it or if it just matched the story line – either way, I was crowned Miss Instant Beauty, given the coveted Zivot crown, and we were sent on an all expenses paid trip to a beautiful resort in Cancun.

With the stage behind us, a triumphant photo with some of our very kind but mischievous producers.

All in all, the most important thing I took from this experience was this: the “reality” that we see, whether it be on television or social media, is not always what it seems. I am the first one to admit – I clean up my house before I have company over, or take a picture of my kids – but in reality? Hurricane Noah almost always ensures that I have Cheerios and Hot Wheels littered across my floor to keep me humbled. We only get one life so it should be an honest one, and kept as real as possible. I know that after being on this show I had a major shift in my perception of people’s personality and lifestyles online compared to what’s displayed in the media they chose to put out there. This experience taught me that regardless of how I behaved or tried to act, there could or would always be someone who could spin or change it to be the way they wanted to perceive me, possibly in a very negative way. So I decided to start being myself, and accept that those who mind don’t matter, and those who matter don’t mind. Becoming a more real and honest version of yourself isn’t always going to be popular; but what’s popular isn’t always going to be real. So my final piece of advice? Always be honest about how you feel – and never be sorry for being too real.

CATCH US ON THE GRAM